Taylor, H. (2020) Evidence of glacial erosional processes that led to the formation of landforms in the Coppermines Valley, Cumbria. Routes 1(1): 99–108.

Through fieldwork in the Coppermines Valley in Cumbria, glacial erosional processes can be seen to have take place. By studying a corrie and a roche moutonnée, both located within the valley limits, a conclusion can be drawn to answer the question of whether there has been past glaciation in the Coppermines Valley. The erosional processes of plucking, basal slip, creep and regelation, abrasion and smoothing can all be seen due to the investigation carried out. Understanding the past processes that took place within this valley can help to enforce the fact that glaciation within the Pleistocene epoch has shaped the Cumbrian landscape that we can see today.

The research question posed to investigate will be: is there evidence of relict glacial landforms in the UK? This topic is important to further understand the past climate and conditions that occurred in the UK. During the last glaciation, 115000-10000 years before present, there were five stages of ice flow in Cumbria (Livingstone, 2011). These all contributed to the erosion that shapes Cumbria today and provides the valleys and corries that support the lakes and tarns that give the Lake District its unique characteristics and name. 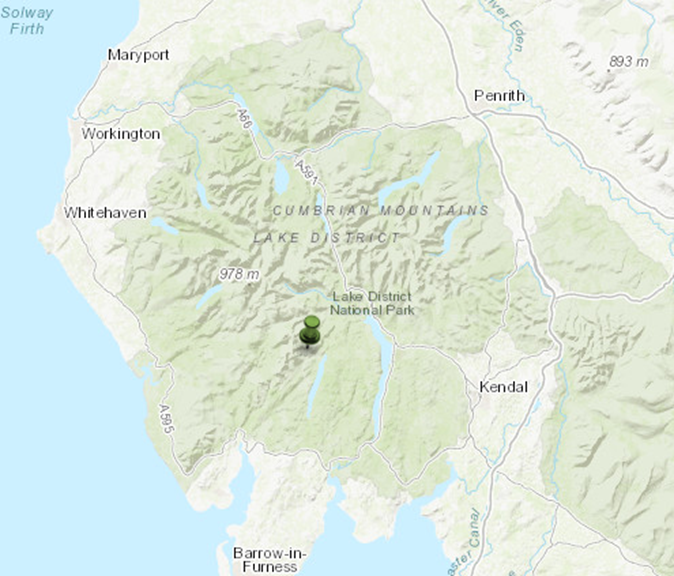 Figure 1. Location of the Coppermines Valley within Cumbria (source: ArcGIS)

Figure 2. Method used to collect data for roche moutonnée profile, however, land shape is different (Field Study Centre, 2018). The field interval used in this data collection was three meters, and the angle was the data collected.

Corrie measurements were carried out on the shore of Levers Water using a GPS locator, an Ordinance Survey map (OS map), a clinometer and a compass. This location was chosen to collect the corrie measurements due to this corrie being the most pronounced in the valley. Altitude and distances were collected using an OS map using the scale bar and contour lines. The angle from the lip to crest was measured using a clinometer which was used as close to the floor as possible to ensure that the data was as reliable and as accurate as possible. This angle was used to work out the maximum backwall height.

The roche moutonnée, a meso-scale landform, and the data collected has led to the production of a cross-sectional profile to show the overall shape of the landform.

Geographical theory on how roche moutonnées are formed is clearly seen to be very similar to the processes that took place in the Coppermines Valley. Roche moutonnées are formed when an outcropping of resistant rock comes into the path of the glacier. This resistant rock is not eroded as easily and so the glacier must move around the rock by ‘creep and regelation’. ‘Creep and regelation’ is an enhancement of basal slip due to obstacles on the bedrock floor. Basal slip occurs when the base of the glacier reaches pressure melting point, which means that meltwater forms from the bottom layer of ice. This meltwater acts as a lubricant, allowing the glacier to slide more easily over the bedrock. ‘Creep and regelation’ means that this meltwater runs around the obstacle and once on the other side of it the meltwater refreezes. This refreezing can occur in cracks in the resistant rock and this can then cause plucking (Boulton, 1979). The plucking consists of the meltwater refreezing in cracks and then as the glacier continues to move down valley the fragments of rock, with lots of ice covering them, are plucked from the rock face and carried in the glacier. The plucking process creates a jagged end wall on the roche moutonnée called the lee. In contrast the meltwater that runs over the resistant rock of the roche moutonnée smooths the rock creating a gently sloping stoss to the landform (Bendle, 2019).

More resistant rock is likely to form a roche moutonnée and in the case of the Coppermines Valley this resistant rock is Borrowdale sill suite, a resistant, volcanic, igneous rock that formed 449 to 458 million years ago in the Ordovician Period (British Geological Survey, 1988). This rock was therefore present during the last glacial period, the Pleistocene epoch which started around 2.6 million years ago and ran until about 11700 years ago, ending with the Loch Lomond stadial which saw significant ice growth across the North of England. This volcanic rock is extremely resistant and therefore the roche moutonnée formed in this location in the valley.

The corrie that was studied contains the tarn Levers Water and is a large corrie with several smaller, less substantial corries within it (Evans, 1998). The outer limits of the main corrie are shown in Map 2.

ArcGIS figures (figures 6 and 7) were used to help calculate the volume of ice in the corrie.

Table 1. Values used to calculate volume of ice that could have been contained within Levers Water corrie

This representation of volume will be an over-estimate due to ice not completely filling the volume shown below and average depth not having been very accurately estimated. This volume of ice alongside the force of gravity pulling the corrie glacier downhill would have been enough to create Levers Water corrie.

When collecting data at the corrie the orientation was recorded; the direction from the backwall to the lip faced a 148° bearing. This is South East, the location on the mountainside where it would receive lots of solar energy. This is opposite to corries that only receive direct sunlight very early in the morning and therefore stay cooler all day. These North East facing corries would often contain ice for the whole year due to the temperatures of the nivations staying cold enough year-round to retain ice (Ballantyne, 2008). This cooler temperature prevents accumulating snow from melting, leaving the snow in the hollow to settle and build up into a large enough volume in the winter to leave snow behind through the warmer, summer months. The aspect of Levers Water corrie and the level of development suggests that the corrie would have been formed over thousands to millions of years in very cold conditions during the Pleistocene due to it not having the advantage of a North East bearing.

Throughout glaciation corries can develop at the head of a valley and are shaped by rotational ice flow as the glacier increases in size and starts moving downhill. Some corries, those facing in North to East directions form in periglacial hollows often called nivations. These are more sheltered and stay cooler throughout the day. The corrie at Levers Water however, did not form in a nivation, but most likely started off as a corrie. As ice accumulated, and the weight of snow increased and started flowing downhill, the basal ice started scouring the rock it was sitting on, eroding a small indent in the mountain side. Over thousands of years the accumulation and glacier mass increase the erosional power of the ice increased causing the indent to be further eroded eventually forming a corrie. (Evans, 1998)

The point where this equilibrium touched the bedrock floor would be the point around which rotational erosion took place. As the ice flowed downhill rock debris plucked from the backwall suspended in the ice caused abrasion of the bedrock. This hollowed out the corrie floor causing a dip to form around the equilibrium line. As the ice velocity and erosional force decreases a rock lip forms. This rock lip traps water when the ice melts allowing a tarn, such as Levers Water, to form.

The results obtained in this investigation have allowed the conclusion to be drawn that the Coppermines Valley has primarily been shaped by glacial erosion; including abrasion, plucking, smoothing of the rock and ‘creep and regelation’ (Bendle, 2019; Evans, 2017; Frost, 2016).

Further to this, the presence of the meso-scale roche moutonnée, measured to be 7m in length, a landform only created through processes occurring during a period of glaciation help to show that erosional processes took place in the Coppermines Valley.

To further understand the landforms of this area, future studies could use additional transects of the roche moutonnée perpendicular to the one carried out in this investigation to create a three-dimensional understanding of the shape. In a similar way the corrie measurements were taken in the best way possible, however, to increase accuracy in calculating of the volume of ice more measurements of multiple locations along the backwall could have been taken in the field. This would have allowed a more accurate understanding of this macro-scale landform that forms the head of the Coppermines Valley.

If these different methods were considered and the data was collected again to result in the same conclusions being drawn, more reliable evidence and results would be present. However, the data collected does still suggest that glacial erosional processes led to the formation of landforms and that these landforms still dominate the Coppermines Valley today.