This article examines the contributions of feminist activists and their role in the promotion of anti-nuclear activism in the UK through the case study of the Greenham Common Women’s Peace Camp, Berkshire which generated protest camps between 1981 and 2000. Taking a socio-cultural geographic understanding of the peace camp I argue female activists surpassed the geographical constraints of dominant social and cultural order becoming a national symbol of resistance to nuclear activity and prime example for wider feminist political action. Examining symbolic ‘female’ political action, this article concludes that the threat of nuclear war is the pinnacle reflection of power and submission at the international scale. Demonstrating the inherent patriarchal nature still present in society. Simultaneously, feminist activism highlights the association of weapons with masculinity and power which influences policy decisions, negotiations and the future of activism.

Female activism is central to the anti-nuclear campaign as feminist campaigners have highlighted the consequences nuclear weapons have, largely on minorities, indigenous people, women and children. However, female campaigners have been essentialised in their association with peaceability, with some arguing women’s maternal capacity enables them to retain a ‘transcendent moralism’ (Mason,2017,p.155). The association of weapons with masculinity and power has a direct effect on policy decisions, negotiations and activism. This article centres on the ‘Greenham Women’ of the Greenham Common Peace Camp. The women firmly opposed nuclear weapons and technology through ‘the power of non-violence to counteract the power of evil’ in emotionally charged expressions of protest (Hipperson, 1998, p.356). The remainder of this article outlines these protest strategies through primary and secondary sources. Primary artefacts were photographed at museum spaces across the North-West as museums produce and legitimise the knowledges of place-based identities acting as powerful political and cultural sites (Geoghegan, 2010).

2. Gender and the nuclear weapons state

Within the militarism and war discourse, men and women are expected to play contrasting roles to exhibit different strains of heroism, with men portraying the ‘solider’ actively seeking and destroying the enemy whilst women adopt a non-combative ‘peaceable’ stand as the primary caregivers and source of maternal comfort (Cockburn, 2013). Therefore, amongst the tools of domination, nuclear weapons are foremost the highest symbol of masculinity. Gendered social stereotypes aid in structuring people’s understanding of war and security. Women’s expectation to be secure community peacebuilders and not political decision makers or active players in peace negotiations has warped the general perception of women in militaristic security occupations leading to female underrepresentation in the nuclear warfare discussion. Whilst the wider feminist agenda proposes democratic values of equality and freedom through the depiction and re-enactment of historical experiences of women as citizens viewed as inferior to their male counterparts, this does not promote weakness or subordination. These representations constitute and reproduce masculine ideologies which undermine women’s authority within state bodies and international organisations.

As such, ‘anti-war feminism’ underlines the gendered character of war, stressing that women’s labour has always been central to war processes although it has frequently been unacknowledged. Gender is not just a characteristic of individuals but a symbolic system central to the organisation of discourse in culture as a way of thinking, imagining and characterising beliefs that shape how we experience and represent ourselves as men and women (Cohn and Ruddick, 2004). Boling (1991) argues ‘civic’ feminists direct attention to politics rather than the gendered social practices of women proposing the ‘femaleness’ nor ‘mothering’ of women make them more pacifist but the influence of feminism on attitudes on war has created a gendered gap in policy views with feminists of both sexes favouring anti-militaristic approaches. Feminists are central when conceptualising the collective organisation of women and their efforts to counter gendered hierarchies when analysing anti-nuclear activism to “reveal the agency of the seemingly excluded” (Ackerly and True, 2006, p. 249). Understanding that power has been socially and historically produced helps to distinguish a gendered language and textual framework which has been legitimated, naturalised and shaped by the concepts of domination and violence (Eschle and Maiguashca, 2007).

One of the most notorious feminist activist spaces in the UK was the Greenham Common located in Berkshire. In 1981 the Greenham Common Royal Air Force military base became the first British site to store US nuclear cruise missiles which made it a prime target for protest. By 1982 the camp became women-only and adopted the name ‘Greenham Common Women’s Peace Camp’ (Feigenbaum et al, 2013). Feigenbaum (2015, p.269) argues protest camps often become ‘laboratories of innovation’ as they are sites where different ideologies and experiences intermix which produces new approaches to the management of nuclear deterrence. Greenham was not simply a protest camp against nuclear armament, it was a testing ground for new forms of non-violent disruption practices as an exclusive female space becoming a central site for the British women’s movement in the 1980s (Marshall et al, 2009).  The unique type and style of women-led protest strategies relied on powerful language and imagery of women. Banners, posters and newsletters, portrayed in Figure 1, frequently located the protest space in relation to women’s history and spirituality to create a space where women demonstrated their agency as a form of power to resist violent structures of patriarchal control (Laware, 2004). Through this process the women crossed over from being ‘ordinary women’ into an ‘extraordinary space’ of national and international significance. 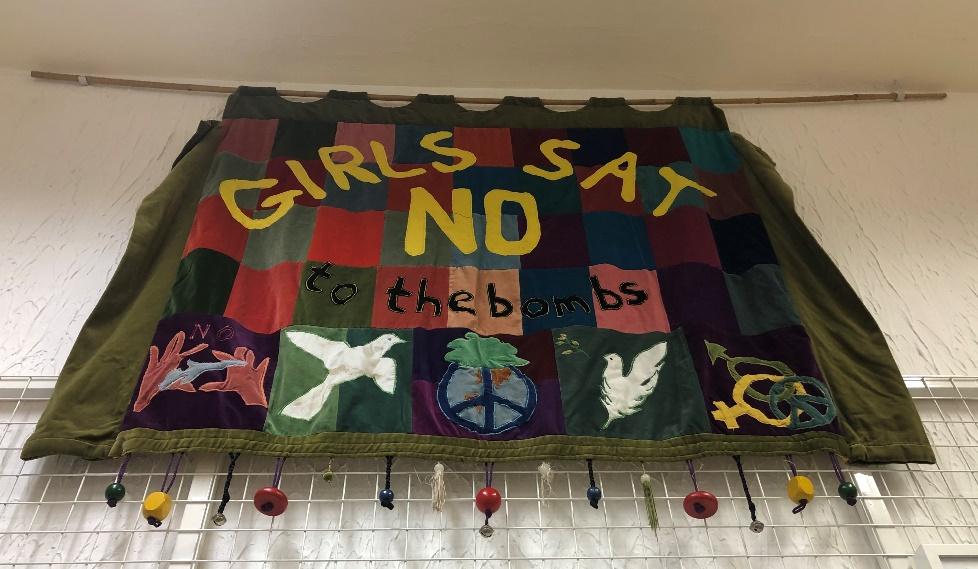 Moreover, the physical layout of the airbase metaphorically represented the structure of power with the American military located at the core, then the British soldiers and then police forces. Outside were the female activists, locked out unable to breach the male space. The nine-mile perimeter fence surrounding the base acted as a focal point for protests, symbolising an arbitrary line drawn between military and civilian space. Space is not plainly a reflection of social relations, it produces relations of power (Koopman, 2015). Women appropriated the fence (photographed in Figure 2) with symbols of the private world of home and relationships, transforming them into public symbols of fear and solidarity (Cresswell, 1996). Everyday mundane items were attached to the fence including family photographs and children’s toys as physical signifiers of the women’s day-to-day lives in contrast to the lethal patriarchal nuclear threat of the base and society at large (Welch, 2010). Paired with symbols including peace doves the Greenham women were able to infiltrate the 1980s feminist discourse, demonstrating their importance by challenging social norms and giving all women a voice. Through the unconventional organisation of the camp and lack of formal leadership every women could act individually leading to the unique protest strategies outlined above, acts which in themselves can be viewed as attempts to invalidate patriarchal living structures. The protest strategies aimed to redefine the boundaries between public and private demonstrating how private fears had transcended the private sphere as a part of public discourse.

According to Ritchie (2010) possession of nuclear weapons reaffirms and in part constitutes the collective identity of Britain as a major world power. Britain’s identity and its possession of nuclear warheads is underpinned by values rooted in international politics about masculinity in which weapons are associated with strength, virility and vigour (Duncanson and Eschle, 2008). Nuclear weapons are framed as an essential element of the state as ‘protector’ of the nation and its citizens. Possession of nuclear weapons has been a central component of Britain’s identity since the late 1940s as a prime world power and political and military ally of the US. Britain’s continual deployment of strategic nuclear weapons is generated by collective identities that define the UK as a major nuclear weapon state. The dominant collective identity is established by the state and defines both national interests that need protecting and the framework of its security concerns. In the context of socio-technological processes the successful dismantlement of the nuclear weapons system would require the disassembly of the political, cultural, economic and technological structures that realign the interests of the whole network, so they no longer perceive nuclear weapons as a requirement. Hence, nuclear disarmament is related to weakness and subordination.

British governmental policies and political cultures have shaped the course of nuclear history but there are other narratives to tell. Hogg and Laucht (2012) argue analysing forgotten ‘nuclear narratives’ of activism provides opportunities for oppositional discourses to challenge the power structures that dominate society. To understand the impact of atomic culture there is a need to recognise the spiritual and societal aspects that have impacted national culture and the lives of individual citizens (Taylor, 1997). Therefore, there must be a shift away from top-down nuclear histories, offering a broader range of voices and approaches. Domestically, the nuclear disarmament debate has been highly politicised with the decision to renew the UK’s nuclear weapon system having little public consultation or informed discussion in the international context. The UK is the only nuclear weapons state that deploys ballistic missile submarines (SSBNs) as its exclusive nuclear weapons delivery platform. The Trident C4 missile system replaced the ageing Polaris system in 1980 and since 1982 the D5 variant of the Trident missile was employed due to its increased capabilities and potential long-term financial savings (Davis, 2017).

The British nuclear state has relied on a nationalist narrative that justifies internal violence as ‘necessary’ to the protection of the state. These powerful cultural narratives frame the UK as a militarily righteous ‘force for good’ and ‘pivotal power’ with international responsibilities to uphold peace and security to maintain current geopolitical order (Ritchie, 2013). However, the UK plays a leading international role in nuclear disarmament as a responsible nuclear weapon state and member of the Non-Proliferation of Nuclear Weapons (NPT) remaining committed to the goal of a nuclear weapons free world. The dangers arising from deteriorating international relations and a potential nuclear arms race between the nuclear powers has accelerated the need of commitment to multilateral disarmament while working to engage with the concerns of non-nuclear-weapon states. This had led to a societal shift in contemporary Britain with more citizens demanding the complete dismissal of the programme. An actor-network does not automatically endure overtime, collective identities are not static and must be continually reproduced as governments, domestic constituencies and non-state actors interact with each other and policy statements are shaped.

To conclude, there has been a disregard of the role of women in the organisation and promotion of the anti-nuclear movement and policy bodies. Whilst the voices of women are not completely silenced, they are only heard in certain circumscribed contexts and roles (Khromeychuk, 2016). Greenham marked a crucial point in the diverse strands of British politics converging in the space of the camp and the reach of its network. In spatial terms the camp was established as a boundary of physical and imaginary importance when considering the importance of formal divisions of social space, first by women being displaced from the private sphere of the home and then by living next to the masculine, public, non-domestic space of a nuclear weapons base. Artefacts photographed at museum spaces have highlighted how women used the airbase as a space of empowerment and action. However, the political elite continue to promote nuclear systems with the Trident Programme expected to cost £1.4 billion for its continuous operation until 2028 leaving UK nuclear policymakers in a ‘battle of the paradigms’ (Simpson, 2013, p.5). Ultimately, nuclear weapon states must collectively decide how progress in disarmament can be translated into actions demanded by non-nuclear states. This will require transparency between nuclear weapon states and collective collaboration of policy spaces nationally and internationally, pressured by the anti-nuclear social movement at local, regional, national and international scales.

Davis, S. (2017). ‘Apparatuses of occupation: translocal social movements, states and the archipelagic spatialities of power’, Transactions of the Institute of British Geographers, 42 (1): pp.110-122.

Routes Launch Competition. Students Click to enter for a chance to win a book! 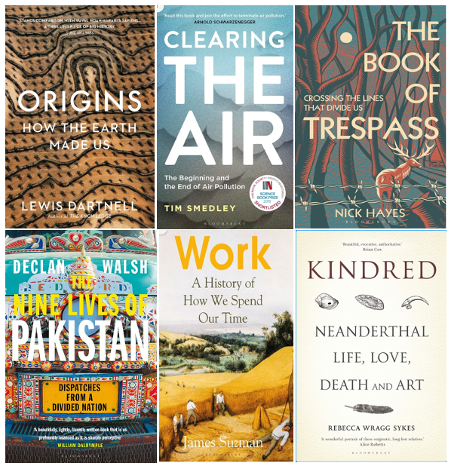