This review examines Charlie Gere’s 2019 book I Hate the Lake District and its attempts to deconstruct traditional Romantic and more specifically Wordsworthian presentations of the area as a place of rural bliss. Gere’s experiences of the Lakes contradict Wordsworth’s poems and it is this dichotomy that is played off through the work. This review investigates the multitude of examples Gere highlights to challenge typical perceptions of the area, whilst also questioning the author’s thinking as to the position and role of nature in the globalised world.

‘The anchor of my purest thoughts, the nurse, the guide, the guardian of my heart, and soul of all my moral being.’ (Wordsworth, 1798).

William Wordsworth’s emotive description in his 1798 poem Lines Composed a Few Miles above Tintern Abbey, encapsulates his concern with the significance of the relationship between humans and the environment. Hunter Davies, author of Wordsworth’s biography, wrote that the great English poet ‘made the whole world love the Lake District.’ (Davies, 2020). Charlie Gere’s 2019 work I Hate the Lake District is an ambitious attempt to directly contradict this notion and this review will measure its success.

Gere’s work is certainly relevant to debates in rural Geography, in particular to representations of place and the idea of a rural idyll: ‘an idealised, romanticised construct that presents rural areas as happier, healthier, and with fewer problems than urban areas.’ (Castree et al., 2013). In the space of just 169 pages, Gere attempts to deconstruct this notion and typically Wordsworthian perceptions of the Lake District, instead exposing an alternative reality.

The majority of discussion in the book is framed by Gere’s own experiences travelling through the Lakes and the text is littered with examples challenging perspectives that view this landscape as a place of rural bliss. The concept of disparate representations of place runs through the Changing Places topic at Geography A Level and Gere picks up on these ideas in this work, highlighting the 1987 British film Withnail and I, filmed in the Lake District close to Shapfell Quarry, shown in Figure 1. Gere observes, ‘the Quarry is starkly visible from the house, though the film is careful not to show this, in order to preserve the romantic image of the countryside.’ (Gere, 2019).

The author also points to the infiltration of luxury retreats and hotels in the Lakes as well as abandoned nuclear waste depots, the construction of the M6 motorway bisecting through the centre of the National Park and the area’s geographical proximity to Liverpool, one of the old English gateways of the slave trade. This myriad of factors alongside the disquieting chapter outlining the seclusion of the Lakes as the reason the so-called Islamic State chose the area as a training site for the 2005 London Bombings, offer a striking alternative reality to Wordsworth’s meditative, blissful writings. The examples Gere spotlights, whilst of course, when placed together construct a more compelling case than if isolated, do form an argument that becomes increasingly convincing as the book progresses. Whilst local residents of the area may welcome this work as an exposure of real life, by the conclusion, those readers, like myself, who have never visited the Lakes, are left with a sense of guilt, perhaps even a recognition that we are all guilty of superimposing our own perceptions onto places, without understanding the reality.

Gere’s discussion of the nearby town of Morecambe, pictured in Figure 2, is one of the book’s most pertinent moments. The author describes the incongruent juxtaposition between the perceived beauty of the Lakes and the rundown vulgarity of Morecambe: ‘What could be less alike than the Romantic vision of mountains and lakes found in Wordsworth and a man in a pink and yellow spotted suit going blobby blobby blobby.’ (Gere, 2019). The point is well made, this identification of two wildly opposing places, geographically near, but in every other way so far, is yet another piece of Gere’s complex puzzle, but perhaps the most interesting sentence of the book then follows: ‘a proper non-jewel ecological consciousness would embrace both equally as part of our environment, equally precious, equally valuable.’ (Gere, 2019).  We know that we do not, but why? One wishes Gere would have taken this idea a little further. 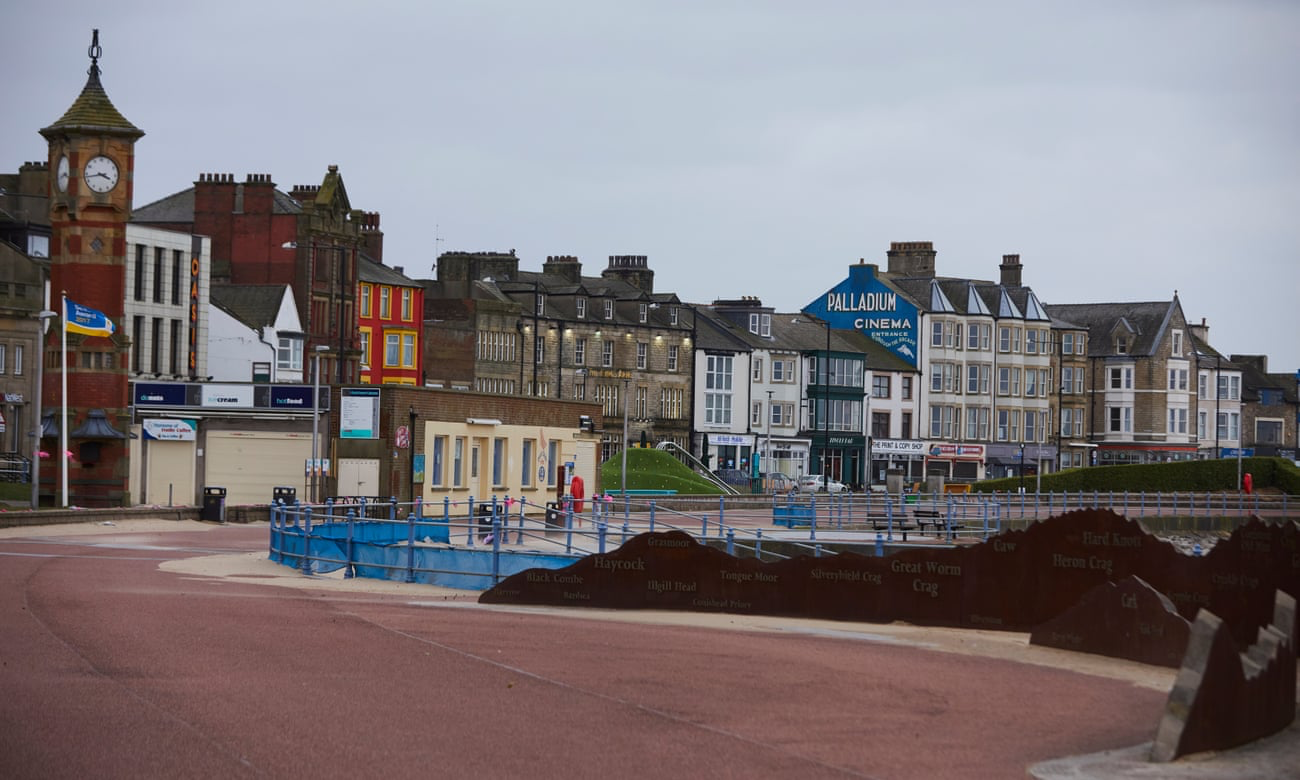 Elsewhere, the author draws upon the words of Theodor Adorno, the German philosopher who claimed that ‘after Auschwitz, to write a poem is barbaric.’ (Adorno, 1981). Gere interprets this phrase in his own way, arguing that perhaps it is also barbaric to seek solace or healing in a place like the Lake District after Auschwitz as well: ‘It is hard to imagine how we can continue to enjoy the Romantic ethos of the Lake District after the brute fact of Auschwitz. All that it is supposed to represent for us now seems impossible; redemption through nature; a sense of the world’s fundamental benignity; an experience of the immanence of the divine.’ (Gere, 2019). And yet at the time of writing this review, during a time of lockdown (due to the Covid-19 pandemic), a time of immense disconnection and isolation, perhaps what one craves most is a connection with nature. Perhaps Gere’s view is a little narrow minded. What of the poorest in society living in small, cramped, social housing? A simple walk outside in the natural world perhaps represents that same form of escapism Keats’ Nightingale offered in 1819, allowing for a movement away from ‘the weariness, the fever and the fret’ (Keats, 1819) of monotonous daily life. Despite horrors of the past, nature remains as important and as necessary as ever- five Dutch Geographers in 2012 undertook a study in which ‘green-space was found to be especially important for mental health.’ (Berg et al., 2012).

This is a short book that uncovers and questions so much and the overriding conclusion is a convincing one. Wordsworth’s experiences of the Lake District were undoubtedly very different to Gere’s, but that is not something this author denies, after all, they were writing over 200 years apart. Instead, as Gere himself writes, it is this ‘kind of fetishisation of the natural scenery’ (Gere, 2019) and perception that the Lakes are ‘some kind of unspoilt paradise’ (Gere, 2019) that the author desires to and successfully does, deconstruct. After reading this book, one becomes convinced the Lake District is not the paradise we all may think.